Note: this is the fifth installment in my own version of #52ancestors where geneabloggers have been asked to write about a different ancestor every week for a year. To understand the concept, read my blog entry from January 19, 2014.

In looking into my tree I find Deborah Collins – my 6th great grandmother. In honour of Mother’s Day I thought it’d be great to look into the female line a bit, and why not go as far as I can?

Here is how I am related to Deborah:

Deborah was born in a little place called Bucks, Pennsylvania back on 23-Mar-1741. Yes, before Canada was officially Canada and before the United States were the United States. Her father was a man by the name of Jonathan Collins and her mother was Ann Smith.

Looking on a map today for Bucks, Pennsylvania, you will find this is essentially a county not too far from Philedelphia that is home to such thriving metropolises as Levittown, Doylestown and Quakertown. Yes. Quakertown. Wonder what type of people lived there?

In searching for the marriage record for Deborah Collins to her husband, yet another Samuel Willson the top of the page had the above text. Quakertown Monthly Meeting.

Like any thinking person searching through their family history, I immediately searched Quakertown. Could it be that simple? Are we Quakers?

Per wikipedia: Quakertown was originally settled by the Religious Society of Friends, or Quakers.

It would appear we are Quakers after all.

When I first posed the possibility to my older sister she vehemently denied that we could be Quakers. No way, no how did she believe that we’d ever be Quakers. I asked her what they were, and she really had no idea other than there being no way. Although she did recall the same thing my mother used to say. She would say “We are Pennsylvania Dutch.” When we’d ask her about it, she didn’t really know how we were related other than it being well before her time. By the marriage record I discovered, we were in Pennsylvania after all.

So if they were married in Quakertown, and the marriage was recorded in the “Quakertown Monthly Meeting”, this means they were at a meeting for the Religious Society of Friends (Quakers). But what are Quakers anyway?

In my research, the first Quakers wanted to break from the established Church of England, which had already broken away from the Catholic Church in Rome. The Quakers felt that he lessons sent by Jesus should be available to everyone. They believed your religious experience comes from your relationship through God, and that it shouldn’t have to go through someone else such as a priest or a minister. It was radical for the day, but caused a very large movement – one that may have ultimately brought my ancestors across the ocean to settle in North America. 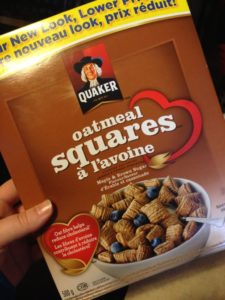 The Quakers believed that all people are created equally, that men and women can worship on the same level and live on the same level. They lived by integrity, honesty and purity. Calling themselves “Friends” Quakers would not take up arms against another person and they would not pay any taxes to support armies.

Could this be why my family moved to Canada?

Knowing that Deborah Collins, and perhaps many men and women in her family before and after her were Quakers makes me think of a simpler time. I picture the person on my favourite cereal, Quaker Oatmeal Squares. Simple clothing, forward facing, soft smile. Quakers are said to be simple people. Was my Great-Great-Great-Great-Great-Great Grandmother and Grandfather?

I may never know unless I get up and go looking. I’ve recently discovered there is a Quaker Archives in Pickering, Ontario. Perhaps this is worth a pilgrimage.