As I mentioned before I’ve been wandering around through ancestry.ca trying to find my relatives and those of my husband. It’s taken me back to England, Scotland and Ireland as that seems to be where our roots came from on both sides. Or so I’ve been able to find anyway. 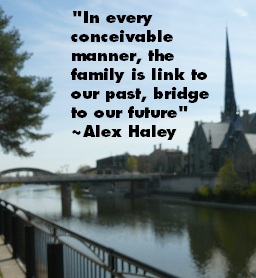 I was having a hard time trying to track down information on my husbands side of the family so decided to ask more questions of my father-in-law and his brother during our annual thanksgiving dinner, which luckily was being hosted at my house. With laptop in hand, I keyed in as much information I could get as possible. I was astounded by two things:
1) The pair of them had never even thought of asking about this information when they were younger
2) Uncle Gord has an incredible knack for recalling birthdays of everyone in his life – including his father who passed away in 1996 and grandparents. This information helped me immensely. The lack of information other than those who they remembered meeting face to face, did not.
I keyed in the information they gave me and sat and waited. Nothing happened. No hints at all. I decided to start focusing on my mother-in-laws family and we found some great things. Sadly, the person in her family that would know everything passed away before I had a chance to have a meeting of the minds. It’s too bad I never met Uncle Donald as his first hand knowledge from many trips back to Scotland would have helped me immensely in narrowing down where I should be looking. Even without his help I was able to trace the family roots back to 1822 in Scotland.
Which – brings up another thing that I found shocking. The Scottish government has not opened up their census records to be electronically viewed on ancestry so you have to rely on everything to be transcribed. This is a bit of an issue seeing as you may want to actually verify that what was written is what you are agreeing to on your tree. I thank the heavens that my Scottish family has several books published about them and their history so I have already gotten to 1744 just by opening one book.
We were interrupted to have dinner. And who are we to stand in the way of delicious turkey and all the trimmings made by my husband. The meal was fantastic and it proved that it was what family was all about. From our oldest member to baby Nickolas, we were all there in a warm house, with good food in our belly. It was great. James did a fantastic job making everything and I hope I didn’t get into his hair too much.
My sister-in-law and her husband were bit a little by the idea of researching family history and asked if I’d be willing to look into some of her husbands family. Her husband is of German descent and he has a very large family. I was surprised to learn that not much is known but as soon as I started to think about it, I realize that a lot of information would’ve been lost in the first and second world war. Many parts of Europe had records lost when the bombs fell. It may make things very difficult for me to get any information. I took down what I could from them and asked them to find out if they can get any more information as it would be really helpful. 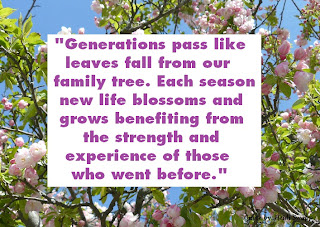 After everyone left to go home, I looked again at my husbands dad’s family and somehow some leaves had popped up which meant that there were some hints. Soon I was going through the waves and discovered what looks to be a French American, who settled in Quebec but was arrested in the war of 1812 as an American spy. I was dumbfounded and exhausted from a day of searching so I just left it for another day but the whole idea of it has really got me stumped. In all of my side of the family the worst I found was a 1 month jail term for larceny back in the 1780s. This is huge and it also affects the history of my country that I’m so proud of.
As of 9:01pm on Tuesday October 9th, I have 514 people on my tree, husbands tree and my brother-in-laws tree. We are all interconnected by the here and now and go back into the 1500s. My oldest relative Thomas Willson who was born in 1564 in Windsor, Berkshire, England. The most common profession among the men in my tree is farmer, among the women, chairwomen with seamstress coming a close second.
It is astounding to me that I have gotten this far and I haven’t even touched my maternal grandfathers Irish roots. I think I’ve found a passion that I will have for the rest of my life.