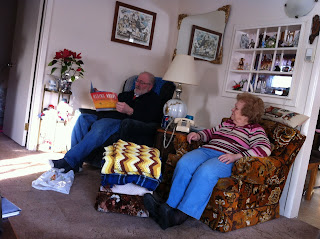 My dad and I took off to visit my great aunt in Brandon Manitoba a few weeks back. She’s 87 years old, almost 88 and still has her complete wits about her even if her feet don’t move as fast as they used to. I always loved my Aunt Margaret and have missed her in recent years as her health has begun to fade and her husband, my beloved Uncle Ed, passed away. Nothing will mean as much as her smile when she saw us there and her tears as she said good bye.

A trip like that is hard on so many levels. It’s great because you know you are going to see the person you love but it’s hard because you know it might be the last time. We want her to be with us for years to come and we’d love if she could make another trip down to see us. But we know how very hard that will be as she doesn’t drive anymore and gets tired more and more easily. 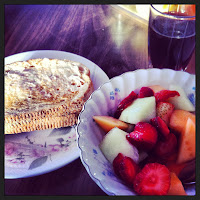 While at my Aunt’s I was really worried about the last couple pounds I needed to go to reach my goal. My aunt lives in a butter and 2% milk world. I was certain that I wasn’t burning enough calories and tried to combat as best I could. Rather than eating the pies and ice cream she offered for desert, I’d have a bowl of fruit. I still had a piece of chocolate every day, but it was only one or two small pieces and I tried to get out and walk a bit if possible. Somehow, I came home and found that I had not only beat my goal, I surpassed it and was down 33 lbs from where I was at last May. Unfortunately, since coming home I put a bit of that back on but I’m still below my 30 lbs lost and I plan on continuing the downward swing.
While in Manitoba my dad and I stopped at a bunch of locations and saw a lot of things. We went to the Winnipeg Mint and got to hold incredibly expensive coins as well as saw them making some new quarters coming for 2013. We walked around the Forks, did a little bit of shopping and a lot of picture taking. We loved the shops, the food options and especially the way that everything was at the Forks. The park had paths for walking and for skating. It had a hill for snowboarding with all sorts of rails and jumps that you know would be incredibly gnarly. (Do people even use that word anymore???) 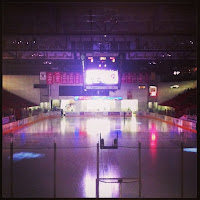 Where my Aunt lives in Brandon, Manitoba was really nice. Brandon had everything you could need in a city including all the amenities and chains that I’ve come to love here in Ontario. It’s pretty much the biggest city between Winnipeg and Regina so anything you’d want to find is there.  The weather was great while we were in Brandon. It was cool, but as long as I had a sweater on I found I didn’t really need a coat.  We went to a Brandon Wheat Kings game only to see the home team lose. I had higher hopes for the caliber of hockey but the other fans in the stands were only hoping for a fight. I still walked away with a hooded sweatshirt and socks with the team logo. 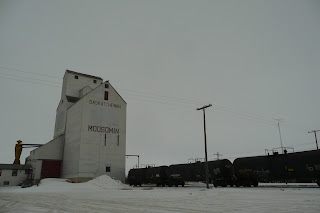 On our first cloudy day, we took a day trip drive down to Souris, MB and over to Saskatchewan before turning up to Moosomin, SK. Moosomin is pretty much a small town. It reminded me a lot of Ayr, Ontario but with slightly different architecture on the houses and a giant grain elevator looming over it. We had the immense pleasure of trying out the post office and the liquor store. The post office was exactly like you’d expect in the rest of Canada, although I did get a dirty stink eye from an old-timer who didn’t think I belonged. Could have been that I was a stranger, or it might have been that I didn’t have a coat on. Either way, I just gave him one right back when I ran past. The liquor store had a lot more Polish beers and quite a few less options as far as varieties on liquor or wine. It was Saskatchewan after all – not really known for the micro breweries that we have here in Ontario. 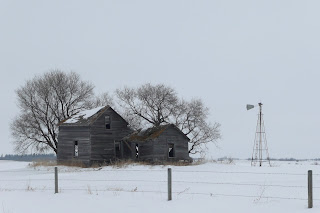 On our trip I became fascinated with decay and captured some really great images. My favourite almost looks black and white considering the house and windmill have been so neglected but the yellow of the wheat near the building stands out. It seemed that Western Manitoba and Eastern Saskatchewan don’t have the same urge that we do in Ontario to fix up anything falling apart. It was actually really beautiful to see. 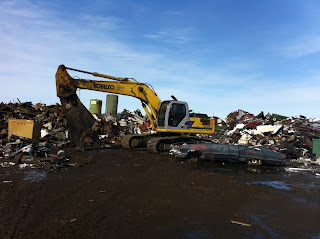 We helped my Aunt clean out her garage. My dad did the majority of the heavy lifting but I got to go along for the ride when we went to the scrap yard. It was a picture taking gold mine as most of the vehicles still had original paint. The lower pollution levels and lack of salt on the roads had made the vehicles stay in near mint condition. Personally, I loved seeing them all stacked up like a child’s dinky toys.

We saw a lot and had a great time. It was sad to go, especially when the forecasters were calling for up to 25cm of snow. We packed up and took off early. Braved through whiteout conditions but had the truck back to the rental agency with time to spare. We knew that our plane was delayed when we left the house, but it got delayed again by the time we checked in at the airport. One more delay and we thought it was almost time only to hear on the loud speaker that our plane tried to land but couldn’t, so it continued to Thunder Bay without us. The plane was supposed to refuel and come back within the next hour and a half. 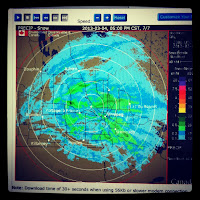 Two hours passed and something didn’t seem right. They had moved our gates three times while we waited and people were starting to get agitated at the gate we were to take off from. I checked the board and sure enough our flight had been cancelled. I grabbed my dad and we looked into getting transferred to another flight that was going direct to Toronto. We both refused to believe we wouldn’t be taking off. Luckily, someone was shining down on us as we got on the next flight. This plane arrived without any issue and it was a bit of a miracle to see after not seeing any planes on the tarmac. The low ceiling and the merging storms from the Rockies and from Hudson Bay made for perfect storm weather conditions in Winnipeg but we made it out with only a few bumps and had a smooth two hour and 1 minute flight home.

All in all, I was happy to have seen more of this great country I call home. It was a trip I had to take and I was glad to have some Daddy/Daughter time along the way. Of course now I’m already thinking up where to go next, but that’s all for another day. Today I just get to cuddle with my husband and my dog and know that I am loved and was missed.