Back in March I had the absolute pleasure of helping decorate my sister-in-law Lindsey’s baby shower. Not one comfortable in the limelight, she asked to have one shower only for friends and family and asked that it be held at her house so that everyone could check out where they live and see the adorable nursery they had just completed for the baby to be.

As part of the decorations, I knew immediately that I wanted to make a diaper cake. I had never ever done one but I really loved the look of them. I always thought they were so much fun. Knowing that the baby percolating in her belly was a boy was a great starting point. I wanted to make the “cake” as boyish as possible, but all soft and baby-like. I wanted there to be no mistakes with the colours that it was for a baby boy. I had various ribbons in the house that I was going to use but what tied it all together were the diapers that I found at Shoppers Drug Mart. 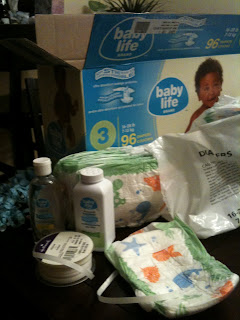 I chose diapers that weren’t newborn as I know how little time the baby would spend in them, some travel size items, assorted ribbons, some soothers, a sippy cup and a teething toy that I draped on the top (not pictured). 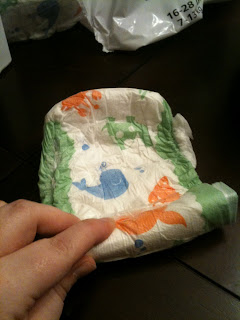 Having never every made a diaper cake and having only seen the finished project and never the process, I decided to just go all in and start. I grabbed my first diaper (shown above with the cute beach pattern) and decided the first step is to roll it. Word to the wise, roll it tight and be prepared to secure it. 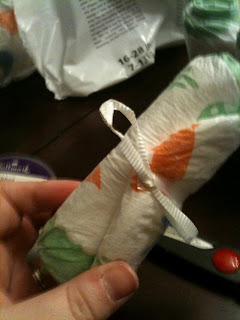 It might have been easier to use rubber bands. I hadn’t thought that far ahead so I used some white curling ribbon and just tied a bow. Realizing I had some diapers rolled, I suddenly had to find somewhere round to put them. I grabbed the first thing I could think of – a cake pan! (excuse the grossness of the cake pan – it’s pretty old) 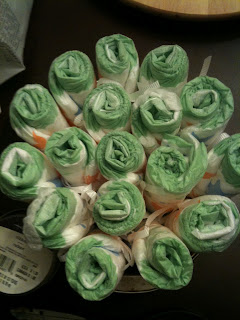 After I had them all in, I noticed they were all flopping out the sides. I put some ribbon around and tied it tight. I wanted to keep it white and then finish it up with the blue ribbon. Again – a rubber band would’ve been a much smarter idea to keep it tight! 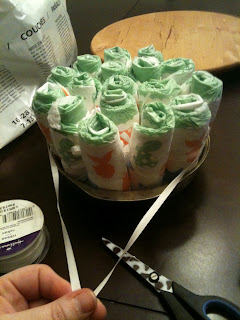 Once the better ribbon was over and holding it in place I stood back and admired my work. It was so easy! and I was so proud but it really needed something. I decided a soother was a good choice with some ribbon. Isn’t that better? 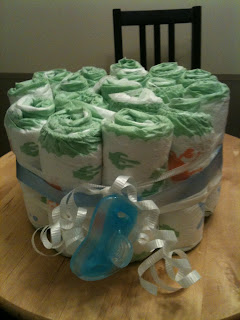 I sat back and decided to do a few more layers. Only problem – I hadn’t thought far enough ahead. I looked around for something round and found this lovely red basket. It was perfect! 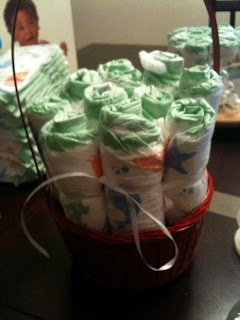 I did the same thing and when it came time to put it on top, I knew that I needed to do something to secure them together. Straws were the name of the game for my cake and they provided a pretty good stabilizer. Once all stacked, I began adding more curling ribbon and replacing some of the diapers with the travel sized baby oil and powder. I tied on some more soothers and a teething ring and then added some dollar store bows. 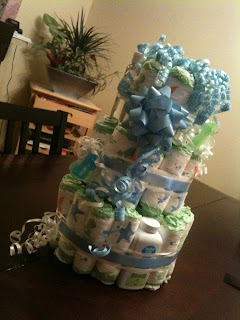 To top it all off came the soft little elephant. I’ve seen lots of kids really like these toys because they are really soft and cozy on teeth that are coming in and are a comfort during sleep time. 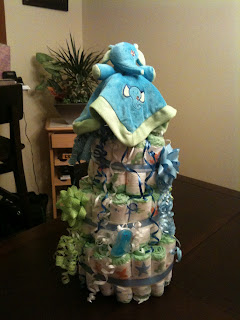 All in all I’m really happy with how it turned out. Hope this inspires you to try one too! And just becuase I want to show him off – introducing my new nephew Nickolas Wolfgang! 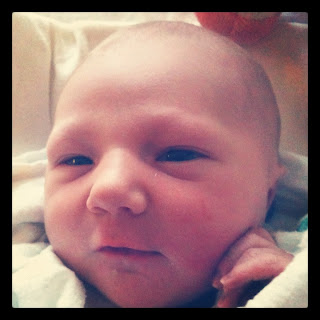