Me and the hubs have made a decision today that is going to change our lives over the next several years. We decided to add a dog to our family. It’s a boy!

As you know, we have been on the fence for a while about getting a new dog. Once bitten, twice shy after everything with the Dude. Long Story short – rescued dog, he had heart worm. We worked with him to treat it and he died after two years of living with us. He would’ve been 6 or 8 or who knows because we rescued him and his teeth were pretty bad when we got him and he always looked like a old soul.

Moving on from that, I’ve pretty much spent the last year thinking how much I’m enjoying the freedom of not having a pet I need to come home to. We really didn’t have a lot of honeymoon time without pets and responsibilities so 2012 ended up being a lot about us, and in particular, me. What? Quit looking at me like that. Everyone has told me that I need to really enjoy my time without kids. Having a dog is like having a kid. You know it’s true!

Even with not wanting to rush into getting a dog, I still kept my eyes open from time to time if there was anything that came up that was perfect. Taking our time was good as we were able to talk about what we want in a dog, which breeds we like and don’t and what size of dog we’d want. Initially I think that James wanted to get a dog just like The Dude. Same size, same temperament. A buddy. A best friend. Another dog for him. (I’ll be honest, he did some things that really broke my trust and my heart when we had him – I loved him, but he was clearly James’ dog.)

Last week we ended up watching a movie or the news or something and it had a fantastic dog on it. It gave us both the warm and fuzzies and so we started looking a bit harder. Last Sunday we decided to check out the dogs available at the Cambridge Animal Hospital. The dogs they had were sweet but the breeds were really not what we were looking for. We spent the rest of the week sneaking peaks at Petfinder or Petango of different dogs we like. I’d send James one and he’d reply “too bug eyed” and he’d send me one and I’d say “No way do I ever want a dog of that breed.” We checked again during the week. Well I checked and sent them to him and he’d holler at me from the office between work to say maybe or no. We both had decided we didn’t really want to travel tremendously far to get a pet and both agreed that we did NOT want to use the same rescue organization we had in the past. We wanted an older dog – ie. no puppy teething, house training, etc. With The Dude we knew we could work on the leash manners and were able to tolerate many things but I don’t think either of us wanted to deal with a puppy.

Wednesday night I decided to get off petfinder and go and check out the local Humane Societies. I know that the Kitchener Humane Society has an issue with disease that has prevented all dog adoptions until it’s cleared up. Somehow Cambridge didn’t have a single dog in residence for adoption so I turned to the Brantford SPCA. We found a dog that sounded like the perfect mix of breeds we like. A Basset Hound Terrier Cross that looks a lot like a Cairn Terrier. We both loved his ragamuffin look and James contacted his sister who lives in nearby Paris to go check him out. After his sister went and gave him the thumbs up, James called to tell them that we were coming. We rushed down after work and found he was exactly as my sister-in-law described. Timid at first but playful and affectionate with the handler. They told us the exact same things, that he was a stray so they didn’t have any history on him. They said he was very shy at first but will warm up to you quickly with even just a simple walk. He’s a bit of a goofball, so he loves to play. 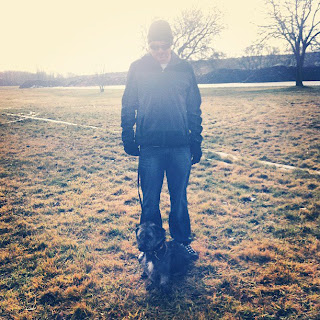 Personally, I was amazed at how tiny he was. For some reason I thought he would be a little bigger but he’s truly just below the knees. His hair was black and brown and a bit silver. I could tell it was a bit wiry and the main thing was that he desperately needed a bath. They asked if we wanted to come back and see him or if we wanted to put in an application. James had already filled one out so we got it in just before we left. They said that it was a great idea as since he’s small, he’d draw a lot of attention. He had his neuter scheduled for Tuesday so they said we could come back on Saturday and take him for a walk just to be sure that he’s who we wanted. We were not taking any chances and showed up right at 11. We got to take him for a good walk on the rail trail but the warm temperatures meant that it was a really soggy mess. Poor little guy got messier than he already was! 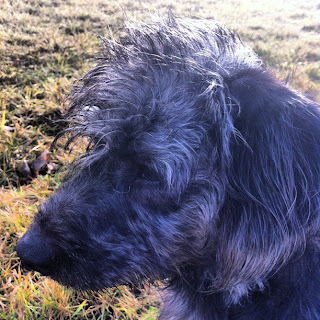 We ended up taking him behind the shelter and his true playful side came out. He bounced around and went for a run with James. He desperately wanted to play and I wished we had a ball to fully entertain him. We both took turns with him on the leash and he didn’t really pull unless something smelled incredibly well and he stood over it stubbornly but moved if we tugged a bit. He’s obviously had some history walking on a leash as he kept looking over his shoulder to see where we were. I even tested him by heading in different directions and not once did he get off track. 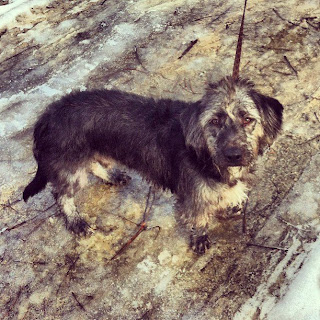 We had a great visit with him and before we left we knew that he was going to become ours. We looked at each other and said “yes, we will take him.” That was it, he became ours. We get to pick him up on Tuesday after his surgery. We have been debating on his name as immediately upon seeing him for his walk on Saturday I called him Bentley. When I spoke of it to James he told me how he had actually gone on a different vain. The dogs name at the shelter is Humphrey, that got him thinking of Bogey which lead to Bowie and now that’s his lead choice. He also liked Ziggy for Ziggy Stardust. The debate rages on and we are trying to prepare our house for the new addition. Hard to believe that in a short couple days we’ll be doggie parents again!