I did something I very rarely do last night – I went into a video game store.

Yes me. And no, my husband didn’t bring me kicking and screaming.

He was on the hunt for some game, I think a racing game or something. He never plays with the games he has now so I wasn’t entirely sure what the sudden pull was. We had nothing going on, I was having a very down day so I really didn’t care what we did as long as it wasn’t wallowing in the sad funk that I found myself in on my drive home yesterday.

Anyhow, enough about that.

We went to the EB Games near our house and immediately upon entering I found an end of rack area set up with fitness games. I’ve been talking about how I wanted to start getting fit using the Wii for awhile now, but my lazy arse couldn’t be bothered to put in any batteries into the balance board so it’s just sat there taunting me for a few months. Okay, maybe it hasn’t been taunting me. It is hidden behind the laundry and so therefore I did shut it up quite good.

Back to the games. There were a few that I was interested in.

#1 – an MMA Fighter fitness game that was all about punching and kicks and stuff to kick your ass into shape. It had this handy little contraption that wrapped around your leg and was connected to controllers so that it was able to track your movements.

#2 – A Zumba fitness game that had you dancing and shaking your way into fitness. I was very intrigued as I’ve heard nothing but positive things about Zumba and about how much fun people have. This game would’ve been cool, but it came with a belt that I could tell would fit around my fat leg and not my fat stomach as they showed on the box. It was built for smaller girls, not for big girls like me, so I ruled it out.

#3 – A game that features a video camera that is mounted to the game where they actually can see you and your progress. You don’t have to stand on anything and you can be any size fat ass that you are in order to start. Jenny McCarthy acts as your personal trainer, or at least her digitized cartoon version is. Per the box it says “Fitness that’s fun and focused on you.” 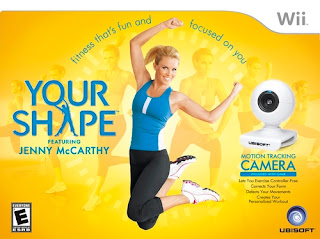 Intrigued by all of them I called over my hubby. He told me “If you want it, go ahead,” and then proceeded to leave me alone to fight over the differences. As you can tell by the title of my blog, the one I chose was #3.

I brought it home, put on my workout gear (minus the sneakers), got the camera set up and prepared to get started. No time like the present right? There were some minor glitches with the camera – the angle it was focused on, that I was wearing black pants and the camera couldn’t differentiate between my legs and the bedspread behind me because they were both dark, but we worked through them and I found that I actually felt good from the work out.

Of course I ended up doing extra because I screwed up in the beginning and had the absolute wrong weight set in the system for me and there was no way to correct this once you got past the initial run – which is a big glitch in the game in my opinion. But other than that, I really felt the game lived up to what it said. Because they could see my movements, they were able to tell me what I did wrong, which was a nice feature. Next time, I’m going to wear sneakers though because push ups on a carpet with socks on are very difficult.

So essentially what I’m saying is, thank you Jenny McCarthy for making it possible for fat asses like me to get up and do some exercise. I look forward to working out with you again.