You’d never believe it, but I have somehow kept on my weight loss journey that I started last year. It has slowed down a bit and it’s not my main focus, but I’ve managed to lose 40 lbs.

40 lbs.
4 – 0.
Wow.
Last spring when I stepped on the scale I knew I needed to make a change. I had to. I couldn’t live the way I was living. I didn’t have energy to do much of anything. I was obese. I was unhappy and I was no longer willing to live that way and by February I had started to see some results. I was even able to keep weight off on vacation – an amazing feat unto itself.
My life entirely changed and I started to work towards a goal. In the past year, I exercise at least 2-3 times a week. I regularly walk for more than 2km without needing to stop to catch my breath. I started running.
Stop laughing!
I hate running. I hate running almost as much as I hate onions but I still decided to give it a try. I saw my husband run 5 km and started to think about it. However it wasn’t until I saw my friend Sandra P run a 5K a few shorts month after giving birth that I really thought I could do it. If she could run it so shortly after having a baby, I should at least give it a shot.
I downloaded an app on my phone to help with the “Couch to 5k”. How the program works is that it progressively gets you moving from a walk to interval running in longer and more frequent intervals. They essentially want to take you from being a couch potato to being able to run 5km in half an hour after 8 weeks.

Week one and two were painful. My calves killed me and I ended up waking in the middle of the night with cramps similar to the growing pains I had as a preteen. It was then that I knew two things. #1 – I needed good running shoes and #2 – I needed to talk to a personal trainer.

I’m very lucky in that where I work we have two personal trainers on staff that have made themselves available to anyone with questions. I have a good rapport with one of the trainers, so I asked him to show me some additional stretches to help me with the problem. He demonstrated how to stretch out the calf while on the stairs and using gravity to pull the muscle. I could immediately feel the benefits and put the stretch to good use. 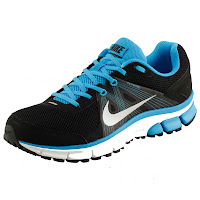 As for shoes, I ended up trying multiple stores and options before coming back to my favoured Nike outlet. I don’t know about you, but I have wide feet with a high bridge and tend to only have luck in the men’s department for most running shoes. For some reason, they make wide women’s sandals, but they just don’t do it for running shoes. Reebok’s fit was narrow no matter which pair I tried on. I found that the arches also hurt my feet. Brooks were not much better and after talking to the team at Nike, I found one pair of wide shoes for running that were perfect. My Nike Air Icarus+ are black with accents of bright blue and white, fit well and are light in weight, but strong in structure.

My first run with the new shoes combined with the new stretches went incredibly well. I combined this with my first street run and survived with my fastest time yet. I still had some pulling halfway through but stretched it out and was able to keep going.

Due to vacation I needed to take a break from the Couch to 5k program but me and the hubby still found time to run at one of the hotels we stayed in near Cleveland. We both did a quick 20 minutes before going in for a swim, but we were still in there on the treadmill doing it.

All I keep telling myself when I’m running is that I’m lapping all those people on the couch. That motivates me to keep going. I keep on pushing and pretty soon my 2 minutes of running will turn into 5 minutes and then 10. Before you know it, I’ll have run for a full half hour and if I’m lucky, I’ll be travelling 5km and will no longer need a voice in my ear telling me when to run – I’ll just be running.