This year is the 50th Anniversary of Westfield Heritage Village.  The village, containing over 30 historic buildings on a 3.4 square kilometre site, is located just west of Rockton, Ontario, Canada between Cambridge and Hamilton.

It is not hard to see the passion and imagination is still as alive now as it was when the Village was created 50 years ago. Buildings have lovingly been restored and furnished to match the period of the day. There are churches, shops, a school house, sawmill, a farm and even a house from one of my ancestors.

The Misener House was donated by the Misener family from it’s original location in Troy, Ontario. The home was built in 1832 by Conrad Misener. Conrad and I share a common ancestor in his father and my 7x great grandfather Adam Misener. Per records I found online, descendants of Conrad’s chose to donate the house to the village after it was inhabited for over 100 years.

The Misener House in the Westfield Heritage Village per the virtual museum “The house itself is a simple, humble, post and beam building from 1832. It was made with local lumber sawn in the Misener’s own mill on Fairchild’s Creek.”

Train enthusiasts have lots to see and enjoy as well. A train station originally built in 1896 has been moved to the village from nearby Jerseyville; a locomotive is on site and a steam powered wagon will take visitors on tours around the village.

My father and his tractor club were invited to join in the Volunteer celebration over Father’s Day weekend and he asked me to come along. The Rockton Antique Tractor and Hobby Club brings in antique tractors and farm equipment that not only go on display but parade around the village, much to the delight of young and old. Even though my father’s tractor isn’t the oldest, his smile as he drives it around the central square might be the biggest of the bunch.

To commemorate the 50th anniversary, a tree was planted in front of the school house. The evening celebration was centered around the square in the centre of the village. The central gazebo was adorned with lights and dominion decorations, live bands were brought into perform including The Ever-Lovin’ Jug Band who put on a fantastic show. The General store was selling fresh baked cookies and traditional candy and it was all capped off with an amazing fireworks show.

My iphone trigger finger was happy to be involved in the festivities as the light was phenomenal. Even my neice got involved by using her ipod to snap some shots and we both loved comparing notes over the images we captured. The team at Westfield really put on a great party which was no surprise considering all the time and care they put in to running the village every week.

Westfield Heritage Village is located at 1049 Kirkwall Road (formerly Regional Road 552), off Highway 8 in Rockton. Westfield is open Sundays and holidays from 12:30 p.m. to 4 p.m. April to October. Special events run from March to December, hours may vary. 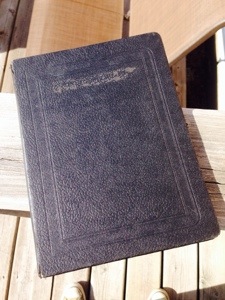 Asked for paper and a pen at my dad’s house on Good Friday to do simple exercise from a course I am taking. He steps into his home office and comes out with a black hard cover bound writing book.

As he hands me this bound book it’s vintage is immediately apparent. The pages have begun to yellow and the binging at the seam is starting tear at the edges.

Something about this book feels inherently intellectual. It feels as if great thought has went it. And I know instantly it is perfect for my task.

Opening the cover I notice the pages are jaggedly cut out from the front of the book but there are still many pages in tact. The sheets are lined. This book was made to be written on.

And this is the moment I realize how special this book is.

Written on the inside cover near the left side is a signature “R. Lovejoy” followed by a date “Oct/72”. 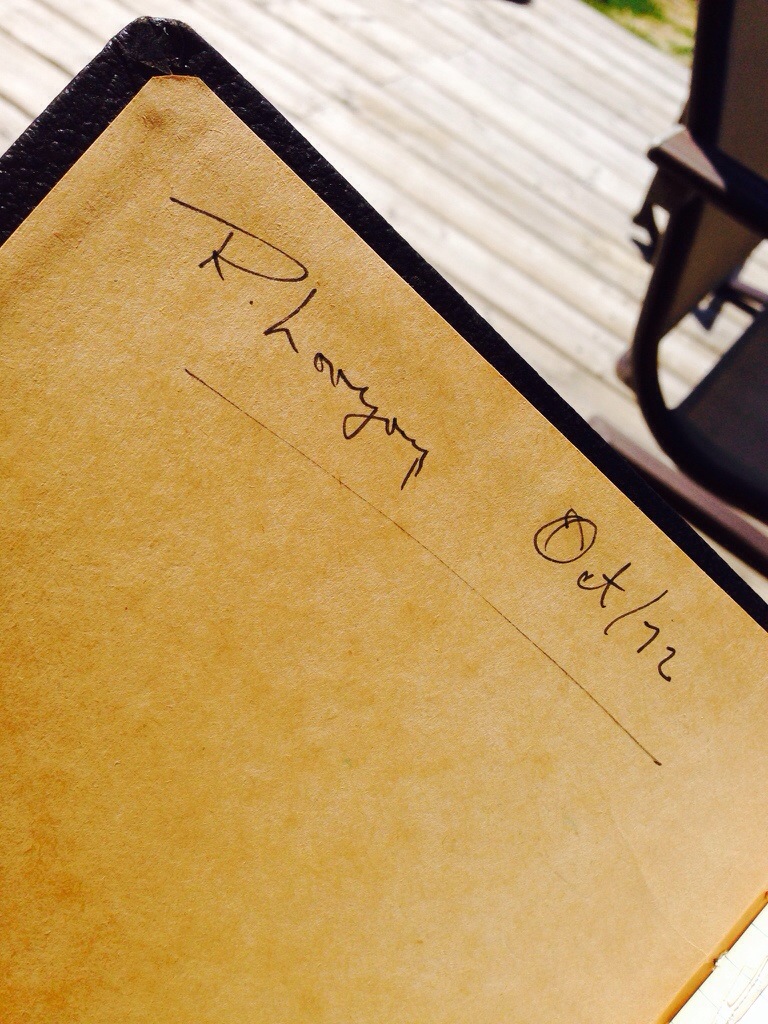 Before I was born, this book belonged to one of my great uncles, either Ronald Lovejoy or Raymond Lovejoy. Both very special men who were very unique and both loved very much by my grandmother Betty.

My Great Uncle Ray Lovejoy worked as a machinist. He was always puttering around designing and building something. Ray had a big smile and a very warm heart, something he passed into his children and grandchildren.

I imagine if the book were Ray’s he would’ve used it to write out calculations or draw up designs.

My Great Uncle Ron Lovejoy was also a special soul with a big smile and a twinkle in his eye. He was a minister in a Liberal Catholic Church in Hamilton. He didn’t let his position stop him from building and creating. He had a special soul and was known to welcome everyone into his life with warmth and compassion. There was something peaceful about being near Ron and amazingly I feel the same when in the presence of his son and daughter.

As we spent a lot of time with Ron and His wife Thelma at their cottage in Long Point, I can almost see him drawing up plans for something he was building, or even a song to play with his mouth organ around the bonfire.

My father offered to let me keep the book and it lead me to wonder how it came into his possession. He can’t recall how he received, whether given directly or if it came from my grandmothers belongings.

Either way, I feel that this book was made to plan and organize my thoughts. It’s a perfect tool and I feel tremendously blessed to have it.