James just called and I am so happy to hear that he doesn’t have frostbite, no one fell through the ice and no one was eaten by a polar bear.

Okay maybe a polar bear would have been a little too far south – but Larder Lake is really far up there!

To celebrate a bachelor party for two guy friends of his, James went up north ice fishing for the first Family Day long weekend in Ontario. The boys left around midnight on Friday – although it was much later than that due to the fact that we got to our rendezvous point and James forgot a very important piece of his luggage – his sleeping bag! 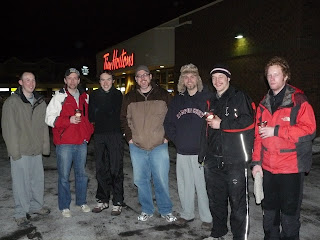 The mission of the trip was to do some male bonding. They’ve been planning and organizing the trip for months. Kitchen, who is one of the grooms, really wanted to go fishing for marlin. He has high hopes any time he is fishing that he’ll catch a big fat marlin. Since going to Florida on a fishing trip seemed out of the question because people would have to take time off work – Richard hatched a scheme to go ice fishing up at his parents cottage. Sure it meant hiking across a lake to get to the cabin, as there is no possible way to drive to the cottage – and yes there was a chance they would fall in. But they are tough men right? Or are they???

There was one stipulation on the trip – all the boys had to grow a mustache. Some had better chances than others and others just grew the faintest of hair but they all did it. James, who started growing a beard to be Fidel Castro for Halloween, was scheming to have the coolest of the bunch. When I saw the finished product, I was shocked at how different he lo 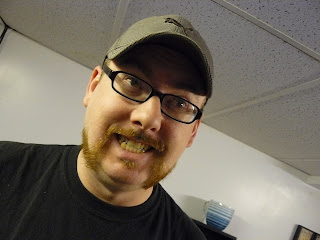 oked. After all, my husband has had hair on his chin ever since I met him. Well other than one time…but we don’t need to talk about that.

Leading up to the trip, many of the wives, girlfriends and fiancee’s had some issues with the boys safety. We were all counting on Richard to keep them all in check and safe. I think when they get home we all should give Richard some fresh baked cookies or something to thank him for being the outdoorsy type – because heaven knows that my man, with his uncallused hands, is definitely not.