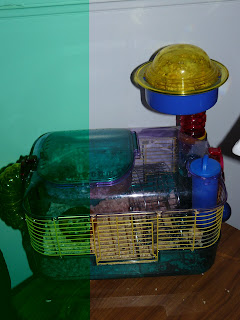 I have spent the past two hours agonizing all over how to make the best use of all these wonderful goodies I got for Beans.

For those of you that don’t know – Beans is my pet. My cute, little, sweet, hamster. She is a wonderful pet. When James and I moved into our apartment in Cambridge, I really wanted a dog or a cat. As James is allergic to cats, and a dog didn’t really match our lifestyle, we started looking at all sorts of smaller animals that required a little less attention. I really wanted a chinchilla. I don’t know what it was, but I figured it would the closest thing in size to cat that I could get. No saying that he wouldn’t be allergic to that too!

Unfortunately, as you may already know, Chinchillas don’t come cheap! My next choice was a guinea pig. It also had a slightly larger stature, and could still be cuddly. I’ve always wanted a g.p. of my own!

Growing up I had a hamster or two. First came Turbo. Turbo was a surprise for me. 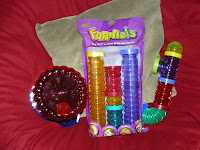 A pet of my very own. My sister and my mother picked it out as they had a deal at the pet store to get a hamster cage and all the fixings and they’d throw in the hamster for free. Turbo was a definite male hamster. Had the balls to prove it! Turbo’s cage was a round concoction with a red plastic bottom and a red plastic top. I used to open the top of the cage and let him climb out. Man he loved to climb! Turbo got out of his cage on occasion – normally when my sister chose to let him out. She bore the brunt of the issues with him. As she would let him out and I would run around frantically hunting for him, so he would get her back by eating her socks and making a nest of them. I don’t know how she never learned to put her socks away!

After Turbo was long gone and many years had passed I got another hamster by the name of Teddy. Seems pretty simple right? Teddy bear hamster named Teddy? Yeah, well I wasn’t that creative during my high school years.

Anyhow, the hamster really wasn’t mine I just got the job of taking care of it. You know, cleaning feeding,making sure he had water. He was actually my boyfriends hamster and he wanted 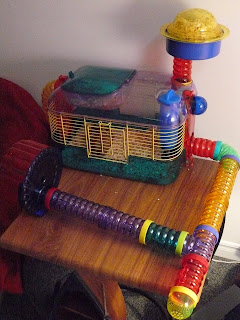 nothing but the best for him. Teddy got to live in a three story mansion – which he hated. He never liked the feeling of the wires going under his little paws and spent most of his time on the ground floor. I tried putting treats up higher and his wheel, but never really liked to get around. Unfortunately, he didn’t live long.

Beans was another story. James and I had talked about getting a pet. He was really liking the size of a guinea pig, and even though I said we could also get a hamster – being as I knew what I was doing if we got one, we were both thinking of getting something bigger. We went to a pet store near our new apartment and were happy to see that they 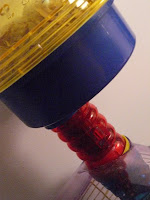 carried more than just food. At the front of the store they had guinea pigs – truly, honestly, full grown guinea pigs. They look nothing like what they do in the other pet stores. These guys were big, skittish and squealie! I still thought they were cute – but our eyes were really drawn to the back of the store. They had these hamsters that had these fun little things in their cages – but there was one hamster – that really caught our eye. She was all by herself in a really colourful cage. She was going up and down a tube to her little bed that was in the sky. She was fairly active and pretty big compared to the others. We found out that she had recently given birth to baby hamsters – that were all in the lower cages growing big and strong so they can go home to another family. James really liked the look of her and her cage. She was quiet, and active and within a few minutes she was going home with us.

We bought a Critter Trail Cage that was aqua, goldenrod yellow, red and blue. It was colourful and fun and we knew that we could get the tubes and tunnels she so desired. We set her up and she 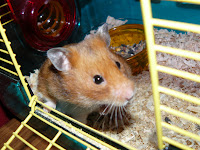 was part of our family. Within weeks James had found a little sky loft for her to sleep in and for a long time life was good. She’s come to know us, and our touch. She doesn’t mind being held and loves to run. We’ve had issues with wheels over the past with squeeking, and because of her size, other wheels we bought were too small.

Yesterday I decided that it was time to make a change to Beans life. I was at the pet store in Guelph getting her some shavings and food when I was drawn to the cages. I thought about a new cage, but there’s nothing really wrong with the cage she has. I wanted to get her a better wheel – as she LOVES to run and her ball. So I found a wheel. The wheel, needed to be attached to the outside of the cage. Well, why attach a wheel just to the outside, when you can have tube 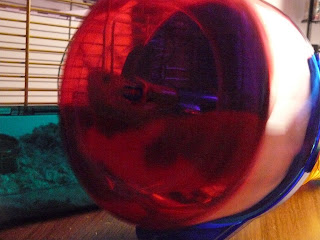 s and tunnels to get there. I picked up a few tunnels and a t-shaped tunnel and a curved tunnel and I started my mission.

As you can tell by the pictures, I acheived my result because before I even had it up and ready – Beans made her way to the end of the tunnel into the wheel and ran. I was so excited and she seemed so happy. She’s been up and down and through the tunnel several times already and it’s only been 10 minutes. I know that I’ve made my precious sweet beans happy with my choice.