When I was a kid it was always cold and snowy for weeks before my birthday. I was able to safely book a tobogganing party for me and my closest friends without any issue. It wasn’t until I reached junior high and high school that this became more difficult. My birthday, even though only 5 days before Christmas, started to continually be a rainy event. I had to find an alternative to the toboggoning party and thanks to my awesome friends – we found a new alternative.

What many of you don’t know, is that I used to belong to a league that was so awesome – I was proud to wear the uniform, as were my brothers and sisters. We got involved rather innocently – our mother took on a part time job and as part, her children got a free membership as long as she worked there.

My cousin signed up too – as she was one of us anyhow. Jaime, my sister Heather and I were all in the same group starting out, with Lisa and Joe being with the older kids. We learned the fundamentals and soon enough we were doing great. I even gained some minor fame in the league when a local reporter came out and took some really fantastic shots of me showing my stuff. They did a photo montage of the actions and it was really awesome to see the prints. My parents still have copies of the newspaper article.

Where could I have recieved such fame and notoriety???? The bowling alley of course!

We played at Cambridge Bowl, which used to be located on Elgin Street in where the Bingo Hall now stands. I remember coming in when my mom was working to get my ever coveted – foot long hot dog. I loved going there – the smells the sounds. Bowling was a lot of fun when you were six!

Fast forward to high school and a lack of snow and a desire to have a good birthday.

The thought of going bowling first seemed pretty kooky and fun. Who would’ve thought that it would become a time of fun and adventure. 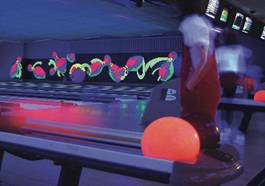 Since my childhood they have come out with what they call “Rock ‘n’ Bowl” aka “Glow Bowl”. Essentially, this is bowling under black light. It’s awesome and with a kick a$$ juke box, and some rocking tunes, it became even more fun. The best, and probably the gungiest place in town with the lights on was Country Bowl. The music rocked and it had a small and cozy feel. It was located on the second story of an old factory downtown Galt (an area of Cambridge where I grew up) and it was just awesome.

I had friends from a completely different part of town that used to ride the bus for an hour just to join me at Rock’n’Bowl and we had many laughs throughout the years. It wasn’t that we were regulars, but were regular enough to know some of the staff and how to cheat the system.

Of course the most memorable time was for my 16th birthday where my best friend at the time baked me a birthday cake. She wanted me to have an awesome time and made the most interesting birthday cake. It was a chocolate cake with chocolate icing (who doesn’t like chocolate) but had the most interesting centerpiece on the cake. She had taken some marshmallows and somehow made a big pink penis on the middle of the cake. It was the most hilarious gift I had ever gotten – and I’ll never forget having that cake with us.

After I went to college, bowling wasn’t a regular thing anymore, and many of the usual suspects went their seperate ways. Somehow the bowling tradition lived on only in me and Devon – who still strive to wear tacky hawaiian shirts every time that we go bowling and get really pumped thinking about how french fries glow green under black lighting, and how awesome a foot long hot dog tastes with the sound of pins falling.

This year – I want to reinstate the bowling on my birthday. I deserve to have a kick ass birthday, and already have enough people for an entire lane willing to come out and bowl with us. We are going to ibowl.ca which used to be country bowl – and it will allow people to have options to play the regular 5 pin (for which I was a minor celebrity) or with the larger 10 pin balls.

It’s going to be one killer time and I’m so glad that BIRTHDAY = BOWLING this year!