A few years ago I used to only eat “Canadian” or “American” food, with a tiny bit of chinese food thrown in for good measure. I was afraid to try new things.

I’m a ketchup girl. If the world was striped of all ketchup I think I would have a difficult time eating hot dogs, hamburgers, macaroni and cheese and grilled cheese sandwiches – foods that I love. For those of you from other places, I highly recommend trying the ketchup on your kraft dinner – makes it just have that tiny little zip!

Anyhow – my point is this – I used to never stray from the tried and true. If it didn’t have some sort of combination I was familiar with, I didn’t want to try it.

I feared certain salad dressings as they weren’t ranch – the only flavour I grew up with. I suppose it started here. I visited a friend a few years ago and all they had was California. I tasted it and instantly loved it. When I moved to Alberta, I became obsessed with Italian and used it as my base pizza sauce when cooking for myself. Since then I’ve been willing to give nearly all salad dressings a try and I’ve been very pleased.

My ex boyfriends can attest to my addition to eating out at restaurants either Italian restaurants or places like Moose Winooski’s, Kelsey’s, Caseys or Crabby Joe’s. Both have menus that include a large number of items, but nothing too out of the ordinary. There’s pasta, and meat and fries or potatoes. Great restaurants, with great choices, and nothing that was too objectionable.

A couple years ago James and I got to talking with his sister and her boyfriend. They loved trying new things and were raving about all the different restaurants they had tried. They loved finding little Indian places or Thai. Raved about how fabulous things were and told us we needed to try stuff. I was still leery even with their accolades. James poked and prodded me until finally one day we were at the park and he talked me into trying an Indian Buffet next door. 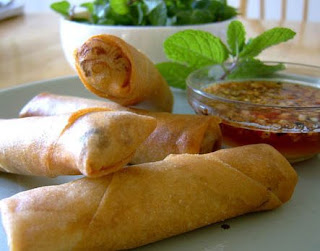 We walked over and the restaurant was small but quaint. The woman who served us was really nice and she explained how the buffet worked and what the different items were. She also kept us stocked up Naan bread – in which I couldn’t help but dip into all the flavourful sauces. It was fantastic. I wanted to go back the very next week. James held me off – as he felt it was too soon, but I was hooked.

Next I tried Thai food – and found that I could get some pretty basic items that are good and healthy. I’m addicted to vegetarian spring rolls – and never say no when the girls at work want to go and get some Thai. Our favourite restaurant is Red Papaya – and I always get the 503 – with rice, salad, two spring rolls and grilled chicken. It’s delicious.

Now it seems when we go out to eat we almost always choose something new or exciting. We go with smaller restaurants and tend to avoid the big chains. We want to find those little places that can be our place. A unique little place that we can share with others. We’ve tried numerous different Indian restaurants, Thai places, Caribbean places and even Portuguese. I have so many food allergies and issues that I always fear I’ll never find anything. Each time we’ve tried something new it amazes me that I’m able to find something on the menu that I can actually eat.

So it’s with this odd obsession for trying new things that I’ve been willing to retry things that I used to hate. As a texture girl, I avoided relish. James taught me the pleasure of eating corn relish, and I’ve always liked tarter sauce, so I decided to give regular green relish a try. Sure enough – I liked it! I’ve now been including it on my burgers and hot dogs and really enjoying it. I still can’t do yellow mustard, but it’s a start right? 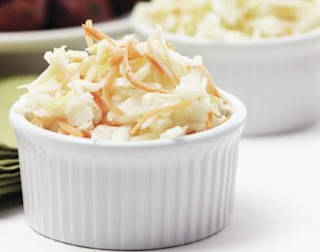 s I found cabbage rolls (which I’m sure I will always dislike!) James and I were at a restaurant and the food I ordered didn’t seem to fill me enough. Eyeing up James’ plate, his coleslaw peaked my interest. I asked if I could have it – to which James passed it up happily. (He hates coleslaw!) I tried it – and there was something about the flavour. I really liked it. I was amazed that I was willing to enjoy something that I’ve always tried to avoid.

This just goes to show – that sometimes you should give something a chance (or in my case a second chance) before saying “I don’t like that.”