It’s official! They are done!!! Unbelievable!!! I’m burning the disk 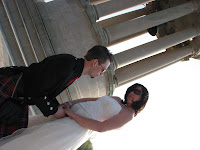 right now and it has 23 minutes left. I can’t wait to give it to them!

Vanessa was a beautiful bride and no one will forget the way Phil’s eyes teared up as soon as he saw her. They are such a great couple and I’m so glad that I can give them the gift of beautiful pictures. I just have my fingers crossed that they feel that I captured them at their best.

I’ve even become friends with some of the people that were in their wedding party – namely Eddie from England. He and I talk every few days or so. He’s a really good person and it’s fun comparing notes from his trip. He went to many of my favourite places when he was here – mostly in Niagara Falls. If you haven’t been there – you are missing out! He even went to Nightmares, which to me, is the absolute scariest haunted house. Sure it doesn’t have the same gore but roaming around in the pitch black following little red lights, and not knowing where your going or how you are going to get there – or what is around the corner. It’s freaky. Of course I was probably 8 when I went through last. I’m not stupid enough to go through now!

Onto another topic – there’s this commercial out for Dairy Queen right now with this little black boy and his parents having waffle bowl sundaes (which look delicious by the way). In the commercial the little boy wants some and his dad says “only if you say this one little word” in which he asks and the boy repeats the word ANTIDISESTABLISHMENTARIANISM. Okay, I have two issues with this commercial. First of all, the video of the kid is soo fake. It’s obvious that they taped the kid seperate from the parents – because even when later the mother character says “you can’t even spell it” the kid starts this crazy giggling but the dubbing is so bad that he starts before she gets the words out. I know kids laugh at anything sometimes, but it was so bad. Secondly, the word antidisestablishmentarianism is not a word that anyone would even know if it wasn’t so long. Just what the heck does the word mean anyway and can anyone really use it in a sentence? And I don’t mean the way I’ve used it in two sentences.

I challenge you to use the word, in it’s proper form. Do it. I dare you!