So my husband and I – namely my husband – has become addicted to watching reruns of shows on tv. Don’t know how it happened but we are both really loving the old shows we never got a chance to watching.

It all started with the Lost a few years ago. We missed the first 6 or 8 episodes so we found them and watched them. We got hooked. TV is so much better without commercials!

The latest show that James is into is the Office. We really never watched that many episode when they are regularly on tv – so he jumped at the chance to borrow them from a friend. Now we’ve been laughing our head off. It’s amazing how funny it is! Some of the lines from the show are really great. One liners that are really great. But for some reason I can’t think of one but I’ve been laughing my head off.

The Office is interesting now that I do work in an office with boys and girls. All I can say is that I’m so glad I don’t have a boss like that! He’s so awkward and annoying. But hilarious. For instance, right now there is a couple in the office geting married – in order to make things fair – he got entertainers for both the guys and the girls. The girls go 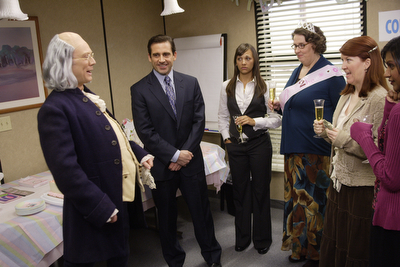 t a Ben Franklin impersonator and the guys got a blonde stripper. How incredibly uncomfortable this is for everyone to see the stripper with their boss.

Watching this show I realize how much I love Jim. His character is just so real and so personable but really creative in how he always drives Dwight nuts. Oh man it’s so funny!

“That’s the thing about bear attacks – they happen when you least expect them.”