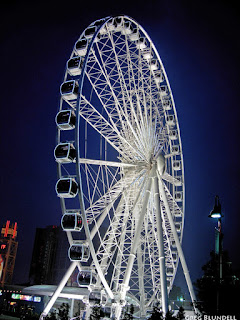 Last night me and some chums went to Niagara Falls for a night of dinner and craziness. Every year at this time until the end of the Christmas holidays, the Niagara Parks Department hosts a festival of lights where they include thousands of lights in displays provided by different corporations and such. We saw many different Disney layouts and this really cool snowflake display on the police department that moved in tune to music. It was wild!

Anyhow – when we first went down to meet up with everyone we were early. I haven’t been there in a while and was excited to see all the changes that have taken place – including the new ferris wheel that has been installed to replace the tower that was there for a dogs age. As soon as I saw the wheel with it’s cool lights and bright white structure – I told James that I really wanted to go on it. James who was up for anything but didn’t want to commit until we ran into a few others said that maybe we could.

It was bloody cold last night – and with all the moisture in the air from the falls, it was not a night to be without protection. (Get your minds out of the gutter! I’m talking about hats, mitts, scarves and warm socks!!!) The ride looked great but the thought of going on without heaters inside turned us off a bit. James decided to call his sister to find out where everyone was. We found out that another couple was already in town and we should give them a ring. We did – and within 5 minutes they met us at the base of the ferris wheel. We were all excited to be out on the town – and as soon as I mentioned that I’d like to go on – my partner in crime Vanessa was all for it.

We ran/skipped/meandered over to the ticket booth and were excited to see in big letters “HEATED”. Having hit the jackpot, we pulled out some coupons which were provided by our parking lot and all got $1 off the admission. We headed over to the front of the line and watched as the wheel went around and around with the passengers inside.

We get onto the ferris wheel and it has these great benches on both sides of the cart. Looking up it looked like a small airplane with buttons and round vents staring back at you. In your little closed in compartment you can adjust the lights and the venting so you can have more or less heat. It was so need to be inside these little darkened rooms and we were all giggly as we started on our journey.

It was on the way up that Vanessa started to express a dislike for the movement of going up. I started to worry that she was going to have a panic attack, especially when we started to speed up and see just how far this huge ferris wheel was going. Now I’m not so great on rides either but having seen it go around a few times I wasn’t that worried, and as the ride was new, I felt safe.

Well, I felt safe until we started to head on the downward spiral. This was when Vanessa perked up and said that she liked it – and I said that I felt like I was going to be sick! If there is one thing I don’t like is the feeling of losing control. Falling down is one of those times. Going up, gravity is on your side- you are pushing. However when you go down – you are loose and falling. I did not like the feeling at all.

Good for me – this lasted all of about two minutes and then we were back up again. The scenery was fantastic and both me and Vanessa ended up enjoying the experience despite our initial hesitation on the ride. James and Phil just laughed at us and stared out at the vast sea of lights, roaring water that was undergoing a beautiful light display of reds, blues, purples, greens. It was awesome and I’m so glad that we went.

While we were on our second or third rotation, James looked down below and saw a few of our other friends, including his sister, going into Tim Horton’s. Of course we had to call and give them crap because we were banging on the windows and waving our hands to try and get their attention but they didn’t look up once! When we got off the ride (after an awesome 5 full rotations) we happily went to talk to them.

I was amazed at the hesitation on some of their faces as the thought of going up so high scared them. It was a fear that I know well. I used to fear everything, but last night we took a chance and had a ball.

By far – the ferris wheel is tops in my books as one of my picks for best value. Of course this is next to viewing the light displays which is FREE and so is viewing the Falls themselves.

For this ride – I give it 5 peanuts out of 6. It loses one peanut for a lack of music. 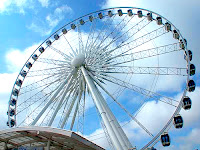