So we’ve gotten ourselves some Fish!!!! 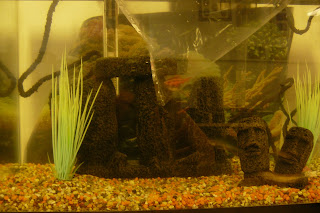 We’ve decided to go with the community fish – tiger barbs. We started off with two small tiger barbs that are white and black striped. Mom had the pleasure of naming them “Bert and Ernie” since they are twins (or at least brothers.)

We also picked up a Green Tiger barb and he’s a big guy. James named him Hercules, but he’s the type of guy that only does what others are doing. It’s almost like he doesn’t know how to swim on his own. He’s always following others and doesn’t like to be alone. Funny that the biggest fish in the tank is so desperate for other fish to lead him around!

And the final fish we got when we were ready was an Albino Tiger Barb. In the bag, it looked almost translucent. However, when you put him in our tank he looks orange. I believe we’ve named him Newton, but we keep changing it. Newton or Samson depending on the day. Most of the time we just call him the albino guy. He’s a strong swimmer and has much more independance than the other fish.

All was going well, but unfortunately we had our first casualty. Poor Ernie hadn’t been doing so well. he was just a wee little guy and slowly stopped hanging out with the rest of the fish that seemed to like to swim in a school. He was hiding in our Stonehenge or on top of it. He didn’t want to eat or do anything like that. Sadly, I found him and he was gone. Luckily w 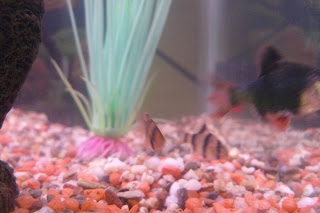 e had a 5 day pet guarantee so we took him back after work today.

This trip was nice, because we got another black and white tiger barb but he’s much bigger and stronger. James named him Louis. We also got another awesome fish – a big cherry barb with really nice red colour. I chose his name as Gomer. When the two of them came into the tank, the other three fish were really excited. They kept swimming up to the bag to see who they are and they were all really happy. We let the bag out and all of a sudden they were all swimming around each other and it really looked like they were swimming in a school.

I figured with our loss of the fourth fish, I’d use Chinese philosophy and get an uneven amount of fish for the tank. This should set the chi. So now we have five fish. Here is the order according to size. 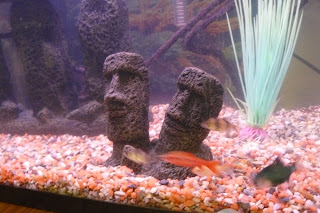 Our tank is really cool considering that we got it off kijiji. We went to an awesome fish store in Kitchener for the stuff inside. We have two easter island heads, two glow in the dark grass plants and a stonehenge. James had to also pick up this long wirey stuff that looks like tree roots to make the fish feel more at home. We chose to mix the rock with some orange rock we had left over from our wedding – so it’s a mix of beige, brown and orange.

Next stop – getting our own little algae eater but I think we should wait until the tank is dirty.

Maybe now that we have fish – I can give up a little on my desire to have a dog. Do you think it’ll work? 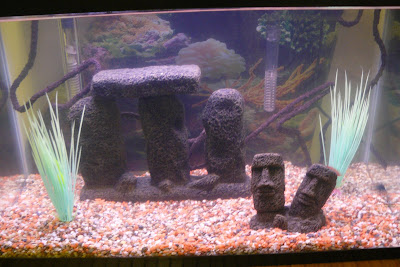