So my pet obsession was assisted along in the past two days.

We went to a barbecue yesterday to celebrate a new patio some friends put in. She has an awesome cat named Riley who is a big orange and white tabby cat with boatloads of personality. He’s awesome and cuddly when he wants to be. Just my general favourite kind of fat lazy cat and I was able to cuddle and nuzzle with him. It was awesome.

Then other friends showed up with dogs. First came Zoey – or Zobo as her friends like to call her. Okay, maybe she has other names, but she’s an awesome dog nonetheless. She was rescued from a shelter by friends of ours and has such an interesting face. She’s a jack russell terrier cross and has a bit of the beard and some wirey hair. She likes to get into things, but mostly likes to play and wrestle with other dogs. She really wanted to get to know Riley too. Thank goodness for leashes or else we might’ve had a real fight on our hands!

After Zoey arrived, two other of our

doggie friends showed up – Sprocket and Milo. Sprocket and Milo are cousins – but only by the fact that their parents are brother and sister. Sprocket is the older, but already showing signs of being the smaller of the two dogs. Best way to describe Sprocket is that he’s a miniature yellow lab – who in my opinion is more white than yellow. Very sweet face and disposition. If he were smaller, I think he’d be a lap dog!

Milo is just a puppy but already bigger than Zoey is. He has huge paws for his 3 month old frame. He’s a black lab and likes to meet and greet every dog and person he can. He’s definitely going to keep my friend busy!

All was well and good, the dogs had their moment of hanging out together while keeping an eye on Riley at the door. And then came Taylor.

My sister-in-law and her boyfriend just got a beautiful German Short Haired Pointer puppy on Friday. They named her Taylor after much bantering discussion back and forth. Taylor was the only female at this crazy barbecue and the boys all noticed. Well maybe not Riley, but the others were very intriqued. Milo in particular couldn’t stop sniffing her. He was trying to understand what it was that made her different. Taylor was pretty timid and ran around trying to get to know everyone and hide wherever she could. She took a few naps and all of us were instantly in love with her speckled complexion, her soft coat and her blue eyes.

I was in my glory and spent time with all of them, but most time with Milo who demanded attention wherever he went. They were all so sweet and I can proudly say that I had each and everyone of them give me a good lick at some point.

It really helped satisfy my need for a pet to spend time with them!

Today, James and got even more prepared for our new fish friends that will be joining our family by going to pet stores and looking up decor and stones and such. We realized pretty quickly that we weren’t going to agree at PetSmart. He really wanted this huge bridge, and I liked this ship and pirate chest. We both had different ideas and so we just agreed on stones, he got something to clean the tank and we were on our way.

We headed back to the site of last nights barbecue since we forgot something and decided to stop at a different store. This store is devoted to aquariams and all the things in them. They have one of the largest fish selections I have ever seen in a pet store – and even have a decent sized shark that lives in this HUGE tank with other oceanic sea life. They even fed the shark while we were there. The kids were ecstatic and one even tried to knock me 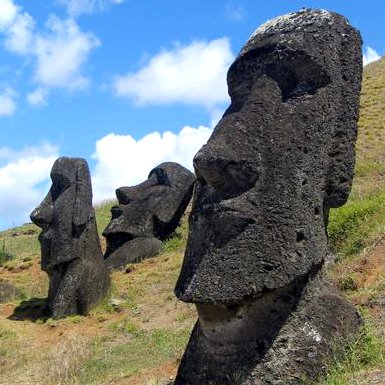 over on her way to see what was going on!

I saw lots of neat fish that I’d like for our tank including some dalmation molly’s and some silver dollars. I hope that we can get some cool fish when it comes time for them. However – this week was all about decorating in order to get the tank fully ready for next week when we can get the fish.

We headed to the front of the store and immediately James checks out a big bridge. I realize that this is his tank so I was willing to get in, until he moves his hand to a stacked stone structure. We both agreed that it was cool but kept looking anyhow. I found this awesome looking stonehenge piece that just so happened to be $3 less than

the other so James said that if I wanted it, we could get it. Happy with my find, I look down and see this great little Easter Island head piece. The colours of the rock made them the perfect match to our stonehenge!

After deciding on some glow in the dark plants, we checked out and headed home with dreams of our superawesome fish tank in our heads.