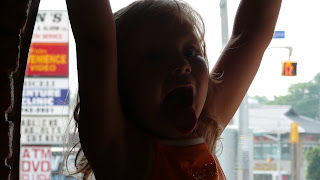 On the last day of school, James and I had the pleasure of taking Miss Victoria and Master Zakary out. Heather needed us to babysit as she was taking my mom out for a good time. Since my mom broke her arm and lost her job, she’s done some great things for all of us. Of course I would take Tori and Zak out too! 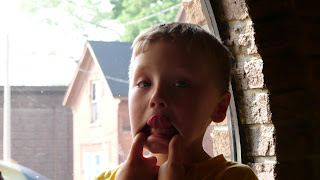 ed that he wanted it to be a special day. He decided that BINGEMANS was in order. But first, we wanted to go out for dinner…

Yummy good pizza was the thing we wanted. Well after they got over the whole McDonald’s idea.

We took the kids to one of my favourite pizza places of all time and they didn’t disappoint. Pepi’s Pizza used to be located downtown Cambridge when I was a kid and it was the only place around. It’s long since closed so we went up to Kitchener to get some. I can’t say much about the branch we went to – other than they

did a great job and they were awesome with the kids. They let them watch as they mounded on peperoni’s and other awesome toppings. Zak was drooling!

The kids were really hyper and probably would’ve been happy 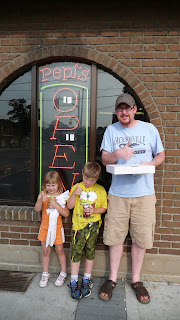 with Pepi’s. But Bingemans was still to come. We played some glow in the dark mini putt – where James and I let them run wild and cheat all they wanted. I’m not sure that Victoria’s played before but she had a lot of fun.

Then Victoria took off on the climbing area and Zak and James played arcade games. She had a ball laughing and giggling. Zak wanted big prizes. I won’t mention that ordeal because it was the only thing that was a challenge all night.

All in all it was an awesome time and I’m so glad that everyone gave Pepi’s a big thumbs up!!