Another year is ending and more importantly another decade. 10 years ago was very different than where I am today.

10 years ago I was very disappointed in myself. I was highlighting my hair more and more and it was almost blonde. I was stuck in my job and wasn’t going anywhere. I was in a dead end relationship where I wasn’t happy, wasn’t appreciated and was generally an after thought. I lived my life for other people.
I made the decision to try and change everything by going to Niagara Falls for a weekend getaway with my parents, my sister and her husband and my boyfriend. We stayed in a hotel near the falls and most importantly – near the park where there would be an outside concert. The very expensive package deal we booked included dinner on top of the Skylon Tower – a rotating restaurant that looked out high over the falls. It was great to be there with my family and ring in the year with great music but I started to see that I wasn’t happy with other things in my life. I wasn’t moving forward.
By the end of 2000 I was single, going out again and having fun and had resigned myself to change my stars. I took a course in writing to help find my muse again and things were looking up.

2001 I went to Mexico on vacation – awarded the Top Performing Studio Manager for Southern Ontario and moved to Alberta to work at a popular hotel. It was a huge year – a momentus success compared to where I had been the year before. I learned to breathe again and how to be myself. I laughed heartedly, somewhat learned to two-step. I made friends to last a lifetime and I had grown and spread my wings and proved that I could handle anything – including living on my own.
2002 I was back at home and happy with who I was. I worked hard to build the portrait studio again and led my team to the highest sales in Canada. I was confident in my skills and ready to rock and roll. It was a building year for me. 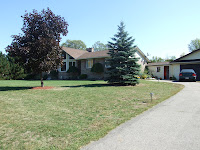 2003 was pretty huge for me personally and professionally. My parents moved from my childhood home and got a house with a basement apartment for me to live. We also went on a trip back out to Alberta to see family and I could show them my old
stomping grounds. I was promoted through my work to work as a
district trainer and subsequently district manager. At the company’s Photography and Sales Meeting held in Montreal I was awarded the Top Performing Studio Manager in Canada. I worked hard and was completely rewarded for my success. Throughout all this whirlwind someone new came into my life. He was kind and funny and really paid attention to me. He could make me laugh and we had a very quick courtship. Within a month I was head over heals and we were pretty inseparable. In 2003 I discovered how much I really loved to host parties – hosted a Halloween and a New Years Party that year and both were really fun. I made new friends that year that I still have today.
2004 was all about work work work! Being a district manager was really challenging – even if it was only for a maternity leave. A lot of hours, a lot of travel and a pager constantly attached to my hip. James stuck by me through it all – even when I had a gallbladder attack and suffered for months until surgery could be arranged. He even drove me to the hospital and sat worried in the waiting room until I came out and even then he sat beside my bed until some colour came back to my face. When the mat leave contract was over I was given a position I could only dream of – something tailor made for me. I was going to be the Regional Training Manager and would work across 4 different districts helping out staff. It was travel but it was a lot of fun and I really felt that I had made a real strong go at it. I was proud of all I had accomplished that year. 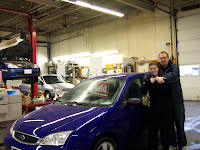 In 2005 at a freinds wedding an opportunity came up that I never dreamed. While sitting with virtual strangers I got to talking with one of the guests. She was a career counsellor and said there was an opening. She thought I’d be great for it – and so I applied. The year contract was with a travelling career centre in the Hamilton area. I had a lot of fun putting together resumes and helping people with job searching. James took this opportunity to ask me to move in with him and together we moved into an apartment in Paris along the Grand River. The apartment was nice with two bedrooms and space for us to spread our legs. We knew it was only temporary but we tried to
put our stamp on it. I also bought a new car – Ford Focus in Sonic Blue. I love that car and still smile thinking of it.
2006 my contract ended and I moved on. I got a job back in Customer Service with a library supply company. Pretty much was doing inside sales and things as first the team leader and then the National Customer Service Manager. I was working more hours than I did as a district manager and it was more stress than I ever could imagine. the department wasn’t very organized when I started and I couldn’t wrap my head around the amount of work. I felt myself drowning more times than not and still I stuck it out for another year. By the end of this year James and I had grown much closer and I was shocked and very happy when on December 21st he got on his knee in a very cold Simcoe park to propose. I said yes and we spent the holidays sharing our happiness with our families and friends. 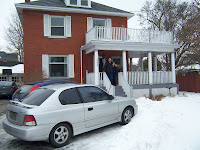 2007 On top of planning a wedding, I kept plugging away in the library business. The customers were great and most of the people I worked with were as well but I was still drowning. It really wasn’t the job for me but I kept working and hoping things would get better. James ended up getting a job in Guelph so we left our Paris apartment and moved to an awesome house in Cambridge.

We were renting with an older woman who had the main floor and the basement. We had the second floor including an awesome balcony and a really neat attic. The house had no storage but hardwood floors throughout. We loved that house but things changed when James lost his job in Guelph and was out of work for a few months. He did find another job in Guelph but when I found out that my position was being dissolved we had to take the opportunity to move. Throughout all this chaos we planned and celebrated with our family and friends when we were married on September 29th. I was so happy to be there with all those closest to us – those that really loved us. They enjoyed our candy table and our outdoor tent wedding and I was so happy to finally be Mrs. Harris. After the wedding and we moved back in with my parents in the apartment downstairs – I found a new job in the completely different field of purchasing. I’d been on the other side of the coin so much that why not give it a shot?
2008 was a building year again. I was covering another maternity leave and wasn’t sure if I’d get hired on at the end of the year contract. Over time I started to realize that I really liked my job and had learned a lot from the library company. Turns out I could be incredibly organized if I started off that way. Who knew? I built on my skills and learned as much as I could. Took on added responsibilities that even the woman on her mat leave wasn’t doing. I loved it and loved the company and really wanted to stick around. I was elated

when I found out she wasn’t coming back and that the job was mine – with a little more money thrown in for fun. With the help of some friends, I was able to organize and throw off the best party of my life – outside my wedding of course. The Beer Olympics were a huge success for all that attended and I don’t think I’ve ever laughed so hard. In the middle of the summer we realized that we wanted to get a place of our own and started going to open houses and talking to agents. We started saving like mad and were able to put an offer on a house by December. Our offer finally got accepted and we were so excited to hear that we would soon be homeowners. 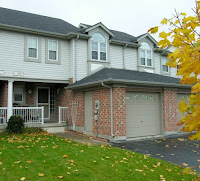 In 2009 a lot of dreams came true. My lovely husband and I moved into a gorgeous townhouse

in Cambridge. We were in the heart of the city and able to get everywhere quickly. No longer did we need to plan everything out before heading into town to go shopping. Our dream of a dog came shortly after our move and The Dude entered our little family. He’s rough around the edges but we still love him and his crazy short legs. James lost his job in Guelph at the start of the summer but used that as an opportunity to branch out on his own and make his business a success. I’m so proud of all he’s achieved by going out and making connections and going to different types of meet ups to build his client base. I’ve continued working hard this year and by the end I had one of the most glowing performance evaluations I’ve ever had. It feels so good to be recognized.
All in all this past decade has brought many changes and many great things. Looking out over the time I know that I’m exactly where I want to be right now. It will be very interesting to look at 2020 and all the things that might have happened. I’m going into this next decade with some goals but also with an open mind.
With that, I am sending all the best to my readers and my friends for a safe and prosperous New Year and New Decade!