I have been working really hard at getting ready for Halloween. 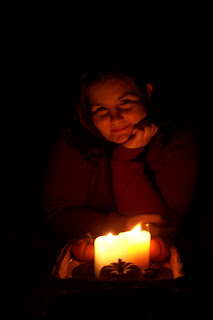 Every year James and I have hosted a party and every year we try and ad something to the mix that wasn’t there the year before. Many have said how my first halloween party was probably the best of them all – and I have to agree. Now that we have moved back to my parents place it seems that we can go back to the charm and the joy of having enough space to have a party in more than just one room.

There are going to be changes of course, as this year the office is not going to be used for a memorial for a sweet dead girl in a pink dress, and instead will be pretty much off limits. We have far too many boxes and junk in there for people to spend any amount of time there. But I’m sure that James will be going in and out all night. He’s a bit of a freak like that.

I will not be including my mystic table this year. So those of you wanting your palms read or your future told, you will have to ask nicely and I’ll see what I can dredge up for you.

But we will be including some gory details, some spooky details and some freaky details. And trust me – I’m putting in a lot of work to try and make these things happen. We’ve even added an outdoor element too.

The thing that has been the easiest for me is my costume. I initially wanted to be a super hero – but when I found a dress that I couldn’t pass up at Value Village, I realized that with just the right accessories and wigs, I could be a really awesome doll. So for approximately $25 I am making my costume be awesome. I’m addressing some not so flattering parts of the dress by using some creative cutting and sewing, and of course I’m adding my favourite knee high socks. And the wig I have is the bomb. After all, it’s the homemade touches that make your halloween costume go from boring and store bought – to awesome and original! 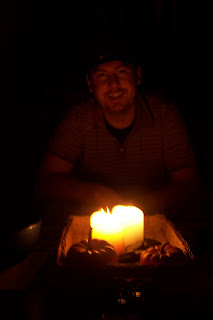 tire month of october he’s settled on one costume and he’s going to stick with it. Thank goodness to because he was making my head spin! (I love you honey!) It seemed like a simple enough idea, but the finishing touches are going to take a lot of time and energy and I’m sure everyone will appreciate how well it comes out. He’s trying to fight back after his embarrasing Mugatu costume a few years back. We’ve had a few Halloween’s since then and he just cant seem to break the bad spell that cast on him.

Everyone else is keeping their costumes top secret – and that I think is awesome. I seem to be the only one that is really willing to admit what I’m doing. I think it has something to do with the costume competition. Every year it comes down to some really great costumes. We all vote, the top male and female get a prize. No matter what we do though – there always seems to be a tie for the winning male costume. Rules have always been a dance off must ensue for the title. For some reason – Adam Kitchen always ends up in the top and always kicks butt in the dance competition. I cannot wait to see what everyone comes up with to be able to top him.

It’s hard not to get in the spirit around here though. The decorations, and with all my family talking about their costumes and what they are going to do it’s contagious. It definitely is going to be a Spooktacular Halloween!