You all know who they are – that group of girls that are out together and everything that excites them they “Woooo” with joy.

Last night – I became a Woo Girl and I have to admit – I kind of liked it.

Started out honestly enough, a bunch of people going out together 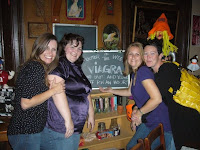 for a 40th birthday party. Lisa and Vanessa decided to do a joint venture even though Vanessa’s birthday isn’t until December. Vanessa’s sister Sarah was hosting in Ayr until it came time to head down to the Queens. Sarah is amazing, and spending time with this group of people always brings unexpected excitement. We’ve hung out with this group quite a lot over the past year or so and it was like I had joined kindred spirits. Those that liked to look good but didn’t care if they also looked a little foolish. The kind of people that told me I looked beautiful even if I had adult acne or my hair was all greasy and sweaty. They like to have fun and just enjoy themselves. And more and more I’ve liked spending time with them. Strangely enough – I had always been the designated driver. Last night the tables were turning and I was FINALLY able to join in with the alcohol.

We had some babysitting to do before we left so by the time we arrived everyone had already had a few cocktails. Within minutes we were beered and the conversation turned a little crazy. Helps that the birthday girls got some naughty adult gifts. The drinks were flowing, the laughs were easy and the girls were ruling the roost!

By the time we got to the Queens everyone was laughing and ready to rock. The dj with his glorious 80’s sweater was very accomodating as we were his audience. We immediately started dancing – soon the shots were coming and a whole lot of Wooing was going on. We were on top of the world and it was so much fun!

I haven’t had a night like that in a long time. Okay, maybe since the last time I hung out with this zany crowd. I’m a Woo Girl. And I’m proud of it!