A few years ago, or maybe more than a few years ago, television came up with this crazy concept – let’s put a bunch of people that don’t know each other and make them live together as castaways in a strange environment. No electricity. No family. No friends. And they made them compete for a chance to win a grand monetary prize.

If you haven’t guessed it, maybe you’ve been living in a cave or under a rock.

The show I’m talking about is of course – Survivor.

It started off innocently enough. The people came and made some friends and all had the hardest time voting someone off. But one player was manipulating the game. He saw that this was a game and a chance for cunning in order to win. He played everyone and it caused some drama. I know I’ll never forget Sue and her speech. To watch it – go here. It’s pretty awesome.

What happened with the final four of the first Survivor changed the way the game was played from then on out.

Sure I wasn’t that into all the subsequent seasons, but there is something really special about this season.

It’s Survivor Heroes vs. Villains. The heroes were selected for the way the chose to play the game and the “good” choices and integrity they had when playing. The villains were selected for their cunning in the way they played. Maybe they switched allegiances and ultimately screwed someone over, but they earned their stripes and were proud of their choices.

This season was different in that the alliances were all laid out very early. You could see the people voted off one by one and if 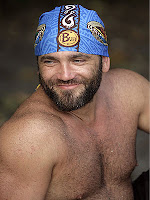 you weren’t part of the “in crowd” you were going home.

It’s true that I haven’t watched the entire time, but I’ve seen enough to know that certain people are being held in the game over promises that are truly not worthy. Russel for instance has gotten so strong that this needs to ultimately lead to his downfall. I have to keep wondering how long they will keep him in the game before they realize he’s playing each and every one. I think everyone is afraid to make decisions for fear it will bite them in the ass later. Russel gets to make all the tough decisions.

I’m currently in the middle of an episode and I can see that this is very tricky. Who goes home? Who stays? Too soon to tell. All I can say is watch Survivor on Thursday nights.