25 years ago I was four turning five. I was pretty excited about this big birthday, as it was my first birthday while I was in school. I tended to wear my long hair in two pig tails as I liked how they bounced and 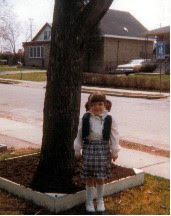 how my curls would make them form two big fat ringlets. I was in kindergarten at Manchester Public School in Ms. Mackenzie’s class. I was also enrolled in learn to skate with the Cambridge Ringette Association with other kiddies. I caught on quickly and was a true tomboy. I loved building things and climbing things. I didn’t have very many fears and thought my brother Joe was the coolest guy on the planet, my sister Lisa was the coolest girl and my sister Heather was mean. We lived on Norfolk Avenue back then, in a three bedroom house for 6 people. I shared a room with my sisters that was painted pink. My favourite toys were dinky cars, Light Brite and Strawberry Shortcake. I desperately wanted a Cabbage Patch Kid but would have to wait until I woke up Christmas morning to find Jenna under the tree. Back when I was four turning five I loved one piece pyjamas and riding my bike – even though it had training wheels. My best friends were two of my cousins: Graham and Danny. Danny and his family lived in the same city as us and he and I would play dinky cars for hours and hours. Graham and his family lived on a farm and we spent a lot of time there. I loved running around on the rafters and jumping into the hay. We would explore and build castles out of sand or blocks. When I was four turning five, I became friends with Devon – and she remains my friend to this day. We used to play house with Steve Roblin as our husband. At this age, I believed that me and my neighbour down the street looked the same with our round faces and long brown hair and I thought because of that we would be friends forever. When I was four turning five I dreamed a lot, played outside a lot and always tried to fit in. I loved animals and loved to laugh. I used to sing to my sister’s high school friends and never minded wearing pink and red together (hey Strawberry shortcake did it all the time, why couldn’t I?) When I was four turning five, I would catch snakes with my sister, build snow forts in any snowbank that I could find and try to have fun whenever possible.

Things that have changed in the past 25 years

I am still me.