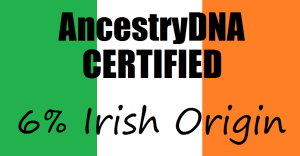 In light of St. Patrick’s Day, many people around the world start looking at trying to research their Irish heritage. I think it’s a fantastic idea, but might be much harder than anticipated.

The political climate in Ireland has caused some major issues for those wanting to track their Irish genealogy. Many of the record buildings have been bombed as part of all the unrest in the country and many of the national archives are gone.

Add to the records being bombed, burned and destroyed, the people in Ireland had no clue how important these records could be to people in the future wanting to trace their roots and some of the papers were not stored or kept.

When you bring in the potato famine from 1845-1852 and 1 million men, women and children lost their lives and many more migrated away from Ireland to find better lives elsewhere, it makes it even harder.

Knowing my family came to Canada, and knowing the Canadian immigration rules around this time, it is hard to know exactly where my family came from in Ireland. Canada was part of the dominion of Britain. if you were a citizen of a country in the dominion, you weren’t required to provide any documents when travelling. For my ancestors, it was easy enough to put “Ireland” on the ships manifest, get off the boat and collect their bags. Nothing else was needed to start their new life in Canada.

This is why I need to go to Ireland. I need to scour church records, cemeteries and try to track down my Hyde’s and Mitchell’s. However, Ireland has a lot of churches and a lot of cemeteries. Where can I even begin?