Sitting here watching Young and the Restless, I’m reminded of just how long I have watched this show. I remember crazy things that the casual observer or new show watcher wouldn’t remember. Then there is even more that I’ve been told by my mother who’s been watching since the very beginning.

First – let’s talk about the first family of Genoa City – The Abbott’s. 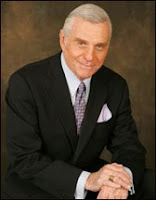 The Abbott’s come from old money and have been an institution in the town since the beginning. John Abbott – who has passed away but still comes on periodically as a conscience for Jack – his eldest son. John had four children in total. Including Jack – there is Ashley, Traci and Billy (William or Liam). The family is founders to the Jabot Cosmetics Company.

Jack is the blond jokester. Has a nickname for everyone and a passion for tr

ying to destroy Victor. More about Victor later. Jack has been married several times in my memory. Jack married Nikki Newman and helped raise Victor and Nikki’s children. Jack was married to Dianne before she skipped town. Then Jack was married to Phyllis. They made a good pair in that Phyllis is so fiesty, but they split when Phyllis hooked up with Nick Newman. Nick was married to Sharon at the time. When they split, it pushed Sharon and Jack together. Funny that he helped raise Nick when he was little and now he’s helping raise Nick’s son! The joys of fast forwarding time on soaps! As for Jack and Sharon, I’ve never liked them as a couple and am glad to see that they are in the process of getting a divorce.

The baby of the family is Traci. She hasn’t been on the show very much but has recently 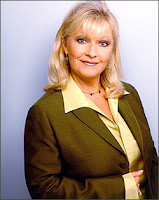 come back more often. I love Traci. The same actress has played her since they were teenagers. She’s always been a little overweight and has lived under the shadow of her older siblings – Jack and Ashley(more about her later). When Traci was a teen she set her eyes on some eye candy – her pool boy Brad Carleton. Brad was working to get his way through school and Traci fell for him right away. They ended up getting married and having a daughter together. Colleen wasn’t advanced age as quickly as some other kids on the show, but she was still there. Of course things didn’t work out as realized when Brad fell for her older sister. It wasn’t until years later that Tracy found a really good man and they moved to New York to raise Colleen. She would come back from time to time, but I’ve been really happy to see her on the show lately.

Onto the second child – Ashley. Another blonde, she’s always been gorgeous and s 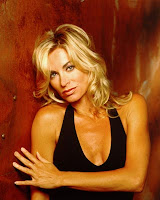 mart. She’s been coveted by many a Genoa City man. As mentioned, her first marriage was to her sister’s husband. She stole his heart with a flick of her long blonde hair. She’s since married him a couple times. She’s also married Victor Newman a few times too. There was also a short marriage to a photographer Blade, and then a novelist Cole Howard. She’s been married probably as many times as Victor. She’s not perfect, but she’s got great story lines!

Billy – well he’s too young to be married yet. But he does have an interesting twisted story going on right now with his half brother Cane. Billy hooked up with “Chloe” – who is the daughter of his mother’s maid… or what was once a maid before coming into millions recently. Chloe got pregnant. Watching the show we are pretty much 99% certain that it’s Billy’s. But she went and manipulated things to get Cane to marry her. Cane thinks the baby is his, Billy knows that it’s not and thus the twisted story. Billy is now dating Lily Winters, who once was the fiancee of Cane. I told you it’s twisted. Hard to believe he’s only been back on the show for a few months. Oh and there was that time when he almost married Mackenzie. She turned out to be his neice and that was really weird. Wonder when she’ll come back on the show?? 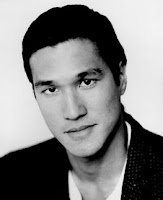 Jack went to Asia sometime during a war I think and had a son. His son’s name is Keemo and is gorgeous but didn’t last long. He was the assistant to Ashley’s photographer husband Blade, until Blade was suddenly killed or died of natural causes. It’s kind of fuzzy to me as he was there one day, gone the next and Ashley disappeared shortly there after. Keemo also left and we haven’t heard his name spoken again.

Jack ended up fathering a child with Dianne named Kyle. Originally thought to be Victor’s, when Jack found out it was his – he wanted custody, but Dianne won and disappeared. I figure Kyle will be super aged any time and will come back as a strapping young teenager – which oddly enough, would put him at his rightful age.

Jack has had a few step children. Nick and Victoria Newman, Daniel Romalotti and Noah Newman.

Ashley has also been the stepmother to Nick and Victoria, even though they are all considered around the same age now. 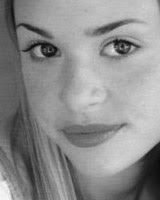 Ashley had difficulties having children, and only has one daughter – Abby. Abby was born via Ashley stealing Victor’s sperm while he was married to Hope. Abby was actually raised to be the correct age and is now a teenager. She’s spoiled rotten. Her first father was Brad Carleton during one of his marriages to Ashley. But when she was around 4, Victor found out that she was his and has decided now that she’s back in town and a teenager, he’s going to spoil her rotten. She’s now gotten a million dollar horse and anything her little heart desires. I can tell that she and I will not get along by how materialist 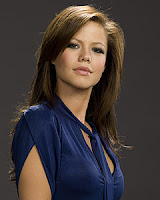 Colleen is the daughter of Brad and Traci. She came back as a teenager a few years ago. She’s had some good relationships, some bad relationships. She’s proving to be a secondary character on the show – much like her mother. She’s a friend to many and I keep waiting for her to have a really juicy storyline – akin to what she had when she was a teen. The premise right now is that she’s waiting tables while she works her way through college.

With mentioning all the kids – I didn’t really talk about the other aspects of the Abbots.

When I was a kid he was married to: Dina and had Jack, Ashley and Traci.
Then he married Jill and she became and Abbott. She’s a fiesty one too – and that’s who he had Billy with. She’s had a very strong connection to Jabot and always loved John. They married twice.

But his most recent marriage was the craziest of all. He fell in love with Gloria. Gloria has proven to be a very strong character on the show and has had many relationships as well. Through Gloria – John had two step children – Michael Baldwin and Kevin Fisher. They have since had many a crazy adventure involving not only John’s house and estate but the company he loved.

I’m sure this is just touching the tip of the iceberg, but I know from my lifetime of growing with Young and the Restless, that knowing the background can truly help you enjoy the show.